In 1947 the team of Will Oursler  (1913 – 1985) and Margaret Scott ( n.d.) , writing under the pseudonym of “Gale Gallagher,” created the first reasonably hard-boiled woman detective. Gale Gallagher, writing in the first-person, heads the Acme Detective Agency, which specializes in skip tracing. Gallagher is single, 5’5″ tall, in her late twenties, attractive, and well-dressed. Her father was a New York City policeman, killed in the line of duty, who educated her in police lore as she grew up. She trained at the police academy, so she knows many policemen. She has a firearms license, but she doesn’t usually carry a gun. She has a secretary and, in her private office, a 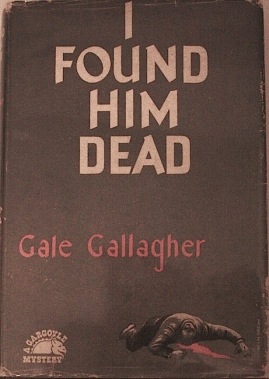 Thomas Hart Benton painting that calms her. Her cases rarely turn too violent; however, she is knocked unconscious in I Found Him Dead (1947) but in Chord in Crimson (1949) she merely walks down dark alleys. From her clothes consciousness to her pastimes (“I do some of my best thinking in the tub”), Gallagher pre-dates the heroines of Grafton and Paretsky. Gale is interested in the jazz scene, frequenting clubs in New York and Baltimore where she sits solo at the bar. She dates a variety of men until she falls for painter Bart Crane at the end of I Found Him Dead (by far the better novel) and becomes his steady during the second novel, which is more in the English “murder-in-the-mansion” school. 8

Almost nothing is known about Margaret Scott, but Oursler , born in 1913, was the son of novelist and playwright Fulton Oursler. Born in Baltimore, according to Wikipedia, he moved to New York, where he attended the Art Students League of New York and then Harvard University. After graduation in 1937, Oursler worked on Boston newspapers.The Trial of Vincent Doon was published in 1941, Folio on Florence White in 1942. 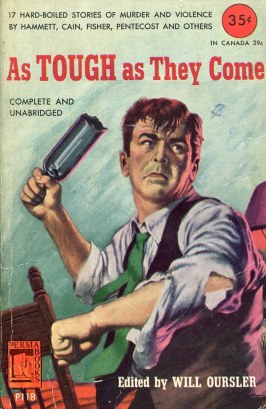 During World War II Oursler spent three years as a war correspondent for Fawcett Publications. After the war, he wrote fiction and non-fiction for Collier’s and Reader’s Digest, as well as the book Father Flanagan of Boys’ Town, The Boy Scout Story, The Murderers, and The Road to Faith, perhaps his best known work. Oursler frequently collaborated with other writers. He edited several anthologies like the one at the right.

He wrote over 45 books, including 12 mysteries. He was vice-president of the Mystery Writers of America. His autobiography, Family Story, was published in 1963. His papers are at Syracuse University.